How to think about how to shoot 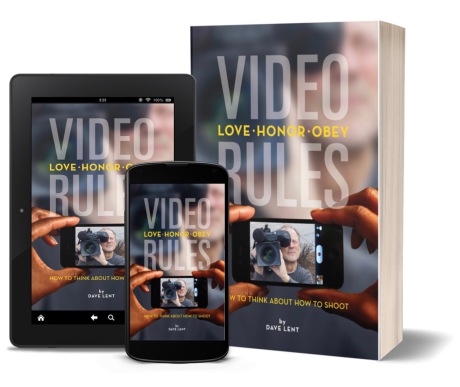 As the Video Age returns us to our tribal roots as storytellers and performers, it's time to re-think what we have to say, and learn how to say it with a camera.

VIDEO RULES is the accumulated know how from forty years of shooting news, documentaries, sports, business and entertainment. Condensed into a set of six basic principles known as The Laws of Camerawork, VIDEO RULES illustrates not only how to shoot—in any situation—but, more importantly, how to think about how to shoot.

"The best, most concise book about shooting video I've ever read. It's deep but also a quick read. I'm a writer, breaking into video, and for me it's the perfect book. Filled with information, it's the kind of book you can go back to, discovering lessons and information you didn't see the first time through. A great book by a master of the art of video."  Reader comment, Amazon

"I have a 19-month old daughter who is constantly on the move. VIDEO RULES taught me how to compose shots and follow her around without the 'shakeycam' effect that makes video hard to watch. Thanks to Dave Lent for this great resource for dads - or anyone who wants to make video that's worth keeping."

"A masterful tutorial for anyone who's about to step onto the field of video. Read this book and apply its lessons. You'll be glad you made the commitment to learn from the  best. Snorre Wik, Cameraman, Washington, DC

"For the last six years I've been working as an author, journalist, and producer. After moving the the U.S., I became interested in shooting, and after reading this book I felt as if I had a mentor with me all the time! "

" Applicable to all cameras – still and video – this book should be mandatory reading for all film and video production students."  Chris Robinson, Cameraman, Toronto

"Most of us would articulate more clearly and understand more deeply if we knew the basic grammar, syntax, and logic of video. Dave Lent presents a straight and simple path to video literacy and, with practice, video mastery. VIDEO RULES should be offered in every American school."  David Marash, Correspondent, ABC Nightline

"Dave Lent, uniquely blends the technological with the visionary, the objective with the subjective, and the material with the spiritual. A must read for the 21st century."  Vicky Wulsin, Physician, Cincinnati, OH

"With insightful anecdotes and clear, simple writing, VIDEO RULES makes shooting seem like common sense—anyone can do it. It teaches how to transform the ordinary image into an extraordinary shot. A must-read if you're looking to shoot better video and kick-ass pictures."  Anja Paul, Filmmaker, Los Angeles, CA

"With such a wide range of ways to film these days - from camera phones to reality shooting to documentary work - there is something for everyone in this fine book. Sharp and to the point, VIDEO RULES is a great read. Anyone who takes photos or shoots video will enjoy it."  Nigel Bellis, President, Ruptured Films, Los Angeles, CA

The shared wisdom of 17 extraordinary lives 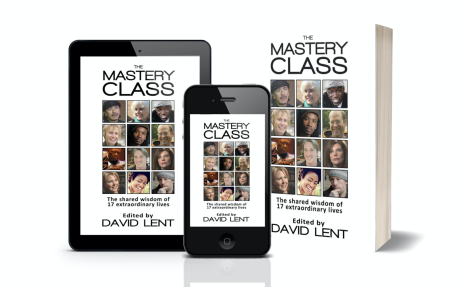 What makes a Grammy-winning musician, an Olympic gold medalist, or a Nobel Prize-winner different from the rest of us? The surprising answer is...nothing.

Producer/cameraman Dave Lent and interviewer Susan Burgess-Lent criss-crossed America on a mission: to test Author George Leonard's theory that "people who reach the top of any field of human endeavor – and stay there – share exactly five traits." The resulting PBS documentary THE 5 KEYS TO MASTERY confirmed Leonard's discovery. THE MASTERY CLASS is a collection of the raw, uncensored, often-startling interviews from this journey.

“Admirable, ambitions, beautiful, brave, adventurous, bold. These are the adjectives that describe the talented people in this extremely interesting of books, The Mastery Class.

Isn’t it amazing that a book, just typewritten pages on pieces of paper, has such power to allow so many moments to endure!

I want to thank David and all his talented interviewers for giving us a glimpse of all these extraordinary people. As I read chapter after chapter, I was personally inspired to continue along my own path in the creative arts and, most importantly, to pursue my life’s goal of becoming the best that I can.

Reading such a positive book encourages people to follow their dreams, acknowledging that fate and luck and hard work will cause things to happen, thus giving art it’s magic.” – JIM STERN, Photographer

The 16 interview subjects for THE MASTERY CLASS